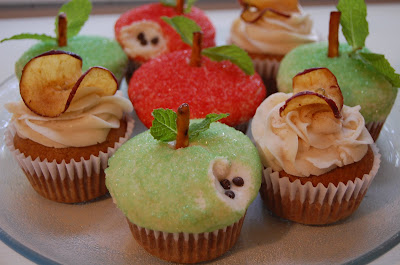 I love making cupcakes and I recently thought about starting a new category on this blog...Cupcake of the Month!

When I think about September, I think... back to school, seasons change, and apple picking... So these apple cupcakes were a perfect fit for this month's entry. I used the applesauce I made a day before and topped them with a wonderful brown sugar cream cheese frosting.

My original idea was just to top these with a little cinnamon sugar and an apple chip but then I saw these...aren't they the cutest? So, in the end, I decided to decorate them both ways. What do you think? Which decoration do you like best...leave me your vote in the comment section-THANKS!

These have a little cinnamon sugar on top and an apple chip. 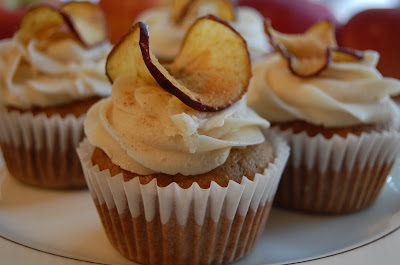 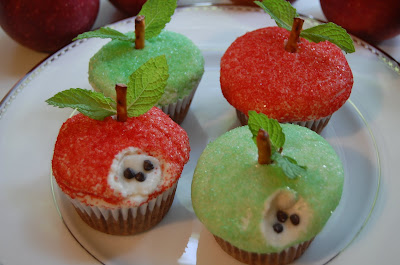 Vote for your favorite look! 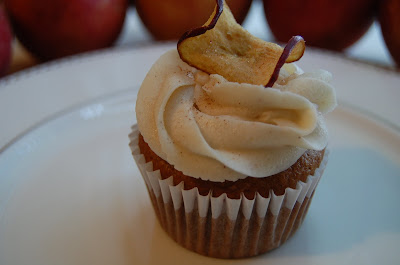 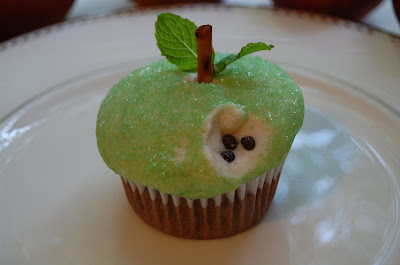 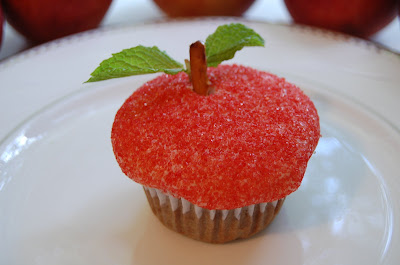 With an electric mixer on med-high, cream butter and both sugars, until pale and fluffy. Add eggs one at a time, beating until each is incorporated, scraping down sides of bowl as needed. Reduce speed to low. Add applesauce and then flour mixture, beating until just combined after each.

Divide batter evenly into lined cups. I like to use an ice-cream scooper to do this. Bake for about 20 minutes, rotating tins halfway through. Cupcakes are ready when a toothpick, inserted in the center comes out clean.
Cool for 10 minutes before removing to a wire rack. Frost cooled cupcakes.

With an electric mixer on med-high, beat butter, cream cheese and brown sugar till smooth.

Frost cupcakes using a Wilton #1 tip, then sprinkle a small amount of cinnamon sugar and top with an apple chip. If making the cupcakes a day or 2 in advance don't put on apple chips till serving time. They will lose their crisp and get soft if left out too long.

Frost cupcakes into a dome shape. Dip cupcakes into sprinkles till all areas are well covered. Stick a short pretzel stick on top to act as a stem. Stick mint leaves next to pretzel.

To make a "bite" mark, use a child's size spoon and remove a small amount for sprinkled frosting. Add three dark brown sprinkle crunchies to act as the seeds. The mint leaves will wilt after several hours, so don't add them till ready to serve if making 1-2 days in advance.
Posted by Maria at 10:11 PM

Email ThisBlogThis!Share to TwitterShare to FacebookShare to Pinterest
Labels: Cupcake of the Month, Cupcakes, kid friendly