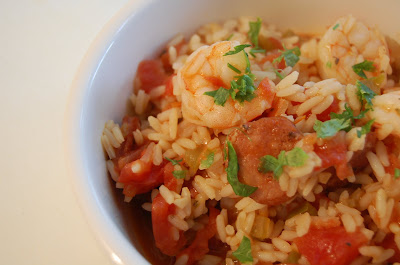 Last week, I picked up a package of andouille sausage with the idea of making jambalaya. I kept putting it off though...until tonight. This was fantastic and spicy!

Jambalaya is a traditional Louisiana dish that is cousin to the Spanish paella. I adapted my version from Elie Krieger's recipe for Jambalaya with shrimp and ham on the FoodNetwork.com.

Please note that I used some different ingredients than are in Ellie's recipe. My version has sausage (instead of ham)and celery (instead of the extra red pepper). I also used only half of the spice amounts she uses and no hot pepper sauce. Since my version already has spicy andouille in it and there was no need to add much more heat.

Check out Ellie's video on how to make this dish though. I always find visuals very helpful when cooking. Aside from the fact that I start off cooking the sausage, the rest of the steps are virtually the same.

Directions
Heat the oil in a large Dutch oven over a medium heat. Add the sliced sausage and cook for 8 minutes. Then add the onion,celery, pepper and garlic. Saute until they begin to soften, about another 8 minutes.
Mix in the spices,tomato paste,chicken broth and the diced tomatoes. Bring to a boil. Stir in the rice, cover, reduce heat and simmer for about 20 minutes, or until rice is done and most of the liquid is absorbed. Add the shrimp and cook, covered, for 5 minutes more, or until shrimp is cooked through. Season with salt and pepper, to taste.
Posted by Maria at 8:41 PM