This sandwich was inspired by another favorite local restaurant. On the menu of the Union Street Pub in Old Town Alexandria, VA there is a "surf n' turf" sandwich that I am so crazy about. In fact, I probably order it about 90% of the time that we eat there.

Their sandwich featured thin slices of filet mignon, grilled shrimp, and crispy bacon on layers of toasty sandwich bread....it's so GOOD!! Since, I don't know the real recipe, I came up with my own version. It doesn't taste exactly like the one at Union Street Pub but it is pretty darn close and very tasty if I do say so myself.

So it all starts with spreading some homemade thousand island dressing on the toasted bread. 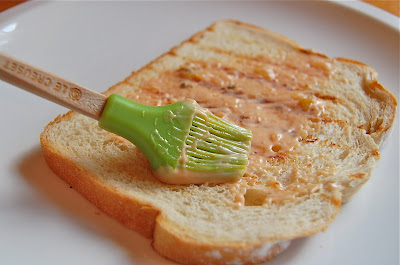 Then we start the layering. I used thin sliced roast beef from my grocery store deli instead of filet mignon here. This saved me some time and $$. The roast beef combined with the shrimp, bacon and dressing is just heavenly! 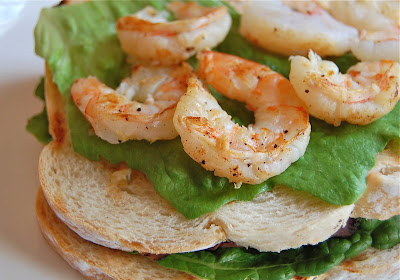 I think a little avocado would be very good here too. Unfortunately, my grocery store didn't have any that were ripe...oh well, next time! 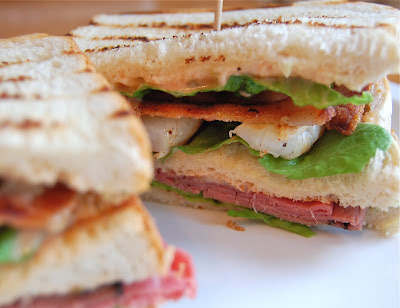 OK, and now for some behind-the-scenes action...this is what happens while I try to photograph a dish, someone eats my props! 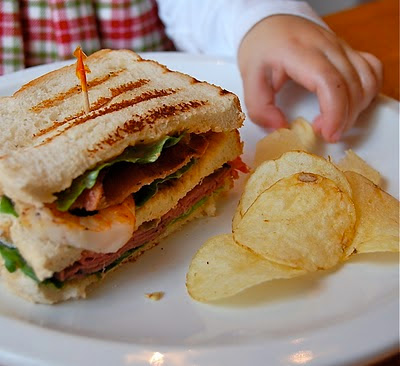 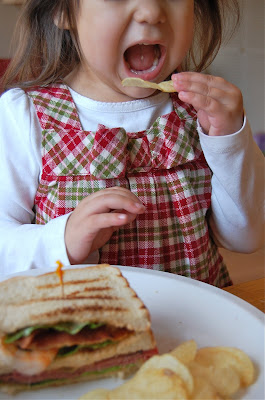 Combine all ingredients in a bowl and mix well. Refrigerate until ready to assemble sandwich. The dressing is best made a few hours in advance or overnight.

Set a grill pan over high heat. Once the pan has heated up well, cook the bacon until crisp, turning as needed. Remove the bacon to a paper towel lined plate. Pour out the bacon drippings and wipe the grill pan with a paper towel, leaving only a small amount of bacon grease.

In a bowl combine the oil, lemon juice, zest, salt and pepper, wisk to combine. Add the shrimp and let marinate while the bread toasts.

Spread a very thin layer of butter on both sides of the bread. Add the bread to the grill pan and lower the heat to medium. Cook the bread until nice grill marks form. Remove from grill and continue with the rest of the bread.

Add the shrimp to the grill and cook until pink and opaque throughout. Remove from the pan and let cool slightly. Slice shrimp lengthwize.