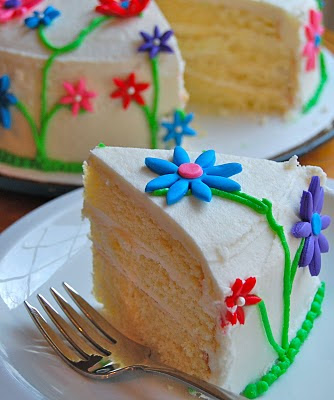 I made this pretty cake for my neighbor's birthday. My neighbor Polly loves to garden so I knew I wanted to put flowers on her cake. When I asked her about it, her only request was that the flowers be red/blue/pink/purple.

Unfortunately, I didn't get to finish the cake. It was supposed to have a smaller cake stacked on top with the same flower decorations. I also did not serve it at the party :( Instead, I ended up running to the grocery store an hour before the party and bought another cake.

Aack! So what happened?

Well, I started working on this cake Friday morning. Then I had to take a break to pick my daughter up from school in the early afternoon. The teacher pulled me aside and told me that my daughter seemed sick all week and was coughing pretty badly that morning. She said her chest sounded very congested. I felt like such a bad mother. She had been sick on/off for the past week but hadn't had a fever since Sunday morning and I didn't noticed a runny nose or excessive coughing. 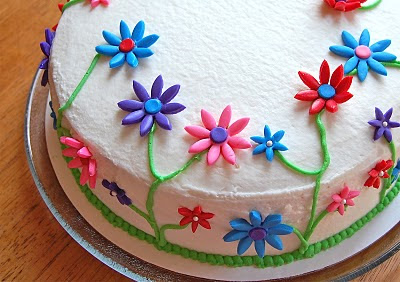 I made an appointment for her immediately but needed to schedule it after picking my son up from school. Well, to make a long story short the doctors office was PACKED!! We were the last appointment and I'm sure we probably picked something up just waiting in the "sick" side of the office. Thankfully, my daughter's lungs sounded clear but the doctor did notice some fluid in her right ear and gave us a prescription for that. Anyway, by the time we got out of there, picked up the perscription and hit the Burger King drive thru for some dinner (the slow-cooker Swiss chicken was ruined by then) it was past 7PM. My kids were exhausted and I was exhausted. 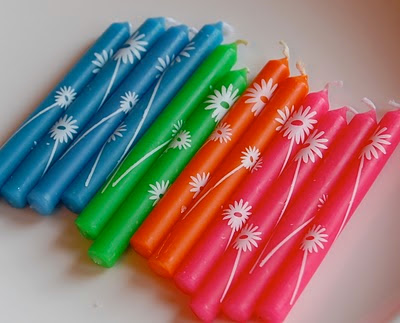 (Pretty daisy candles I found. They matched the cake perfectly!)

I still needed to clean up and return some emails for work. I knew there was no way I was going to bake up another cake and whip up a Swiss meringue frosting in time. Plus, I really didn't feel like serving a cake that I made while I was also taking care of a sick kiddo....hence the easy, store bought replacement cake.

I was really pleased with the way the cake turned out. I haven't had the chance to take any cake decorating courses yet but my skills continue to improve with practice. This was a vanilla bean cake with a traditional American buttercream and the flowers were made of fondant. I would definitely make this cake again and think it would work wonderfully for a birthday, mothers day, bridal shower or other special event. 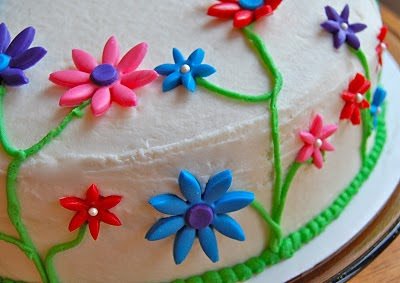