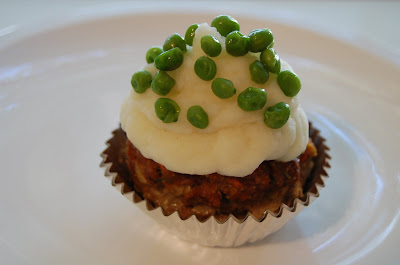 I got the idea for these meatloaf cupcakes with mashed potato frosting and pea sprinkles from Bakerella on Tasty Kitchen. I thought what a clever, clever idea! After all, I had just eaten a bacon cupcake, so why not meatloaf???

I knew my son would get such a big kick out of these too and it would be relatively easy to make. I already normally cook meatloaf in muffin pans as opposed to one big loaf pan b/c it cuts the cooking time by half. A normal meatloaf takes about an hour to cook, but cooked in a muffin pan they cook in about 25-30 min.

I didn't use Bakerella's recipe, though I'm sure it would be fabulous. Your favorite recipe for meatloaf and mashed potatoes should work well here. Also, to keep things easy and quick I used a package of Birds Eye Steamfresh Singles. 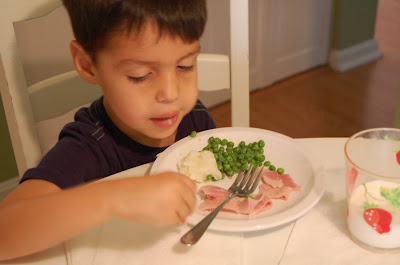 Wait....what's wrong with that picture? .....he's not eating meatloaf!

Truth be told, while my son appreciated the creative attempts with dinner,after two bites, he told me he was not eating anymore. The reason...he tasted the peppers and onions and he hates peppers and onions...sigh...

So, while I don't play short-order cook at home, I also don't force him to eat something he knows he doesn't like. He ate the peas and potatoes but we traded out the meatloaf for some leftover ham.

The funny thing is that my daughter hated the mashed potatoes and peas but LOVED the meatloaf...kids...go figure.

I was cooking for just me and the kids, so please double the recipe to make it a normal 6 servings.

Preheat oven to 350 degrees F (175 degrees C). Line muffin pan with foil cupcake liners.
Place the ground beef and the first 8 ingredients in a large bowl. Mix by hand and season with salt and pepper. Measure out 1/2 cup amounts of the meatloaf mix and shape into a ball. Then place the meatloaf balls into the baking liners. Bake in the oven for 25-30 min. or until thoroughly cooked. Remove from oven and let rest for five minutes before topping with potatoes.

Fill a pot with water and bring to a boil. Peel the potato and cut into same size cubes. Add potato to the boiling water and cook until tender, about 12 min. Then drain potato and return to pan. Add the butter and milk. Mash with a potato masher until creamy, add more milk if needed. Season with salt and pepper. Let mashed cool a bit then fill into a pastry bag or Ziploc. Snip a bit off the end to pipe.

Peas
Cook frozen peas according to package directions. Season with a small amount of butter and salt if desired.

To assemble the "cupcake", just pipe the potatoes on top of the meatloaf and press a few peas into the potatoes.
Posted by Maria at 11:06 AM