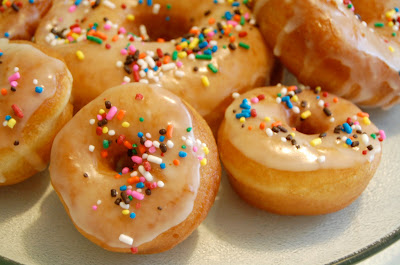 This past Sunday I made raised yeast doughnuts. Yes, homemade, from scratch doughnuts...and they were as good as you would imagine.

I had been a little intimidated to try them up until now. However, I've been working more and more with yeast (and my deep fryer...but that's another story) and finally felt like I was ready to give these a try. 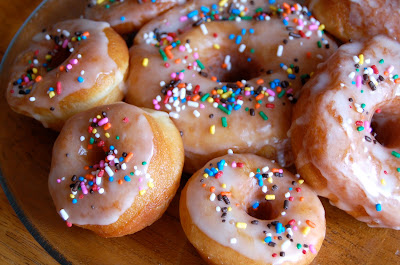 I used Pioneer Woman's recipe after reading several positive reviews and also because she always does step by step photos for her recipes. I know a lot of people are not fans of seeing so many pictures on food blogs, but I'm a visual learner and find it very helpful...especially when trying something for the first time. 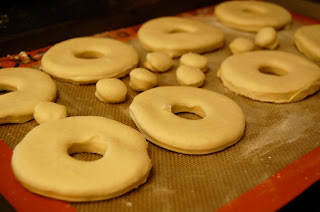 I did have one problem with these. When I placed the doughnuts on the cookie sheet for their final rise, I didn't space them far enough apart. 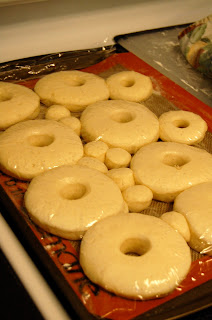 As you can see by the picture above, when they puffed up they got stuck together. When I went to pull them apart, they deflated a bit and really made for a not so pretty doughnut :( Luckily, I still had another cookie sheet of doughnuts that were spaced a little further apart. 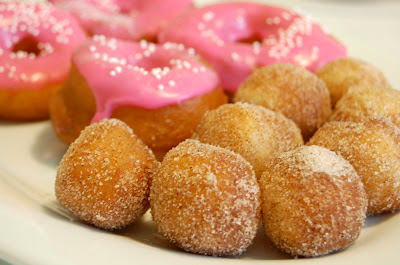 I ended up with 3 different doughnuts. The regular sized that I covered in the sugary glaze and sprinkles, these doughnut holes that I tossed in some cinnamon sugar... 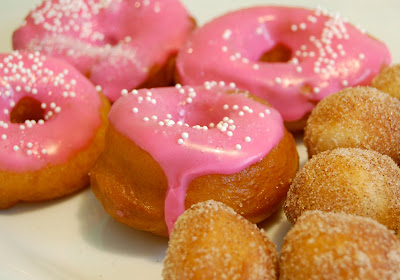 and the pink "Diva" mini doughnuts that got hot pink glaze, sugar sprinkles and white nonpareils. 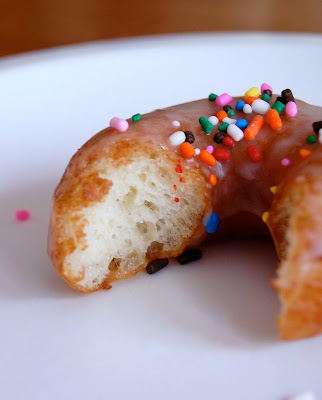 These tasted great but were a little dangerous to have around the house. So, I gave some to our neighbors and even sent the cable guy who was here to do some rewiring work with a doggy bag :)

To Make the Dough:
1. Make sure milk is nice and warm, but not overly hot.
2. Add sugar to milk. Stir to dissolve.
3. Add yeast into a small bowl.
4. Pour milk/sugar mixture over yeast. Stir gently, then let sit for 10 minutes.
5. Melt butter in separate bowl until butter is almost melted. Stir to finish melting so butter won’t be overly hot.
6. Add beaten eggs to melted butter, stirring constantly to make sure the butter’s not too hot for the eggs.
7. Add the egg/butter mixture to the bowl of an electric mixer fitted with the dough hook.
8. With the mixer on 3 or medium-low speed, pour in the yeast mixture.
9. Allow the dough hook to stir this mixture for a couple of minutes, making sure it’s thoroughly combined.
10. With the mixer still going, add helpings of the flour mixture in 1/4 to 1/2 cup increments until all the flour is gone.
11. Stop the mixer, scrape the bowl, then turn the mixer on the same speed for five whole minutes.
12. After five minutes, stop the mixer and scrape the bottom of the bowl.
13. Turn on the mixer for 30 seconds.
14. Turn off the mixer and allow the dough to sit in the bowl undisturbed for 10 minutes.
15. After 10 minutes, transfer dough to a lightly oiled bowl. Toss the dough to coat, then cover the bowl with plastic wrap and place straight in the fridge.
16. Refrigerate dough for at least 8 hours, or overnight.

To Make the Doughnuts:
1. Remove bowl from fridge and turn out dough onto a lightly floured surface.
2. Roll out to 1/4 to 1/3-inch thickness.
3. Using a 3-inch cutter, cut as many rounds as you can, then roll out remaining dough and cut as much as you can, etc.
4. Cut holes out of each round using a 1 1/2-inch cutter.
5. Place both doughnuts and holes on a floured baking sheet.
6. Cover with large tea towel and place in a warm place in your kitchen; my kitchen is very drafty, so I have to briefly warm the griddle, then turn it off and set the sheets on top to keep warm.
7. Allow doughnuts to rise undisturbed for at least 1 hour; 1 hour 15 minutes if necessary. Doughuts should be visibly puffier and appear to be airy.

To Fry the Dougnuts:
1. Heat plenty of canola oil in a large pot until the temperature reaches 375 to 380 degrees—do not let it get hotter than 380 degrees! 375 is ideal; keep the thermometer in the pan to continually monitor.
2. One to two at a time, gently grab doughnuts and ease them into the hot oil. Allow them to cook 1 minute on each side; they will brown very quickly.
3. Remove doughnuts from the oil with a slotted spoon, allowing all oil to drip off.
4. Place doughnut immediately on several layers of paper towels. Count to five, then flip it over onto a clean part of the paper towels. Count to five, then flip it over again; the purpose, obviously, is to drain as much grease as possible before it soaks into the doughnut.
5. Repeat with remaining doughnuts and holes. The holes will cook more quickly than the doughnuts; about 30 seconds per side.
6. Allow doughnuts to slightly cool.

To Glaze:
1. Mix all glaze ingredients in a bowl until completely smooth.
2. One by one, dip doughnuts into the glaze until halfway submerged. (Note: completely submerge doughnut holes, then remove with slotted spoon.)
4. Remove from glaze, then turn right side up on a cooling rack over a cookie sheet (to catch dripping glaze.) Add sprinkles if desired.
5. Serve warm if possible, or room temperature.

To Make Cinnamon Sugar:
1. mix sugar and cinnamon together in a bowl.
2. Add doughnuts and toss to coat