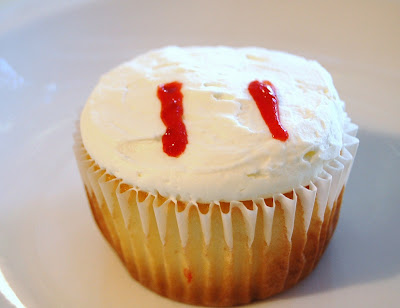 My husband is a big fan of the HBO show, True Blood. The season finale was last Sunday. So, I decided to make him these great vampire cupcakes that I had seen on a few sites.

The recipe for the cupcake came from Baking Bites and the marshmallow frosting came from Rachel Ray. Both were good but I must confess that I messed up the cupcakes a little.

They are supposed to come out very white, to be pale like a vampire, and so the recipe calls for only egg whites. However, my son was helping me make these and I was rushing a bit, so I ended up putting in whole eggs instead. They were still good, but the cake was not as white as it should be.

The blood is made of pureed cherry pie filling. It is first added as a filling, to the center of the cupcake, then to the top to make the bite marks. The original recipe said to make the bite marks with a tooth pick or skewer dipped into the cherry puree but it was not working too well for me. So, I just used a very fine point piping tip and drew them on that way.

These cupcakes are great for any vampire related party (Twilight, True Blood, etc.) or for Halloween. 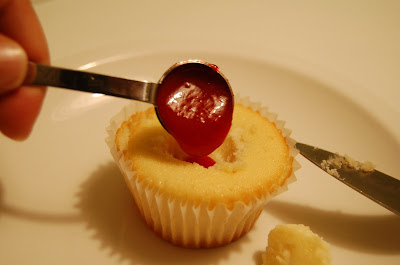 My husband and his cupcake. 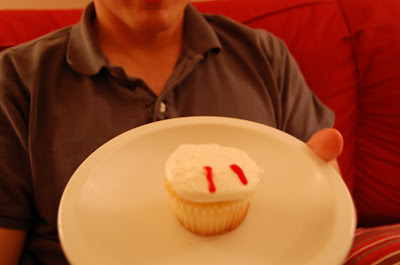 The cherry filling makes for a nice surprise. 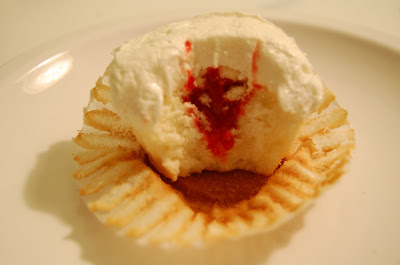 Preheat oven to 350F. Line muffin tins (you will need 18 cups total) with paper liners and set aside.
Sift together cake flour, baking powder, baking soda and salt into the bowl of an electric mixer. Add sugar and blend, using the paddle attachment (You can use a hand mixer, too).
Cut butter into 4 or 5 chunks and drop into the bowl with the flour mixture.Blend on low speed until mixture looks sandy and no large chunks of butter remain, 1-2 minutes.
In a large measuring cup, combine eggs, buttermilk, vanilla and almond extracts. Beat lightly with a fork until combined. With the mixer on low, pour 1 cup of the buttermilk mixture into the bowl. Turn speed up to medium and beat for 1 1/2 minutes. Reduce speed back to low and pour in the rest of the buttermilk mixture. Continue to beat at low speed for an additional 30 seconds, until liquid is fully incorporated. Scrape down the sides of the bowl and beat for a few more seconds, if necessary.
Divide evenly into prepared muffin tins, filling 18 cups as equally as possible.
Bake for 16-20 minutes, until cupcakes are light golden and a toothpick inserted into their centers comes out clean. The cake should spring back when lightly pressed.
Turn cupcakes out onto a wire rack to cool completely.

Puree cherry pie filling - a syrupy mix of sugar and cherries, usually - in a food processor until fairly smooth. Very small pieces of cherries are ok.
Take a cooled cupcake and, using a small pairing knife, cut a cone of cake (1-inch across by 1-inch deep) out of the top. Trim off the pointy end of the cone, leaving a flat circle of cake. Set aside and repeat this process for all the cupcakes.
Take the cherry filling and spoon about tablespoon or so into each cupcake cavity, filling it almost to the top with filling. Top off with the flat circle of cake you just removed to seal the hole and hold the “blood” filling in place.

In a large mixing bowl, beat the butter until creamy. Beat in one-fourth of the sugar until fluffy, then repeat with the remaining sugar. Beat in the vanilla, then stir in the marshmallow cream until well blended.

Assembly
Using a butter knife or a small offset spatula, frost each cupcake with a layer of marshmallow frosting by placing a dollop of icing in the center of the cupcake (on top of the cut out circle of cake) and spreading from the center to the sides of the cupcake.
Dip a wooden toothpick or skewer into some leftover cherry pie filling and poke two fang-holes, about 3/4 inch apart, in the frosting on one side of the cupcake. Dribble a little extra filling from the holes for effect.
Repeat until all cupcakes are frosted and decorated. You will probably have frosting leftover for another batch if you are baking more.
Posted by Maria at 1:28 PM